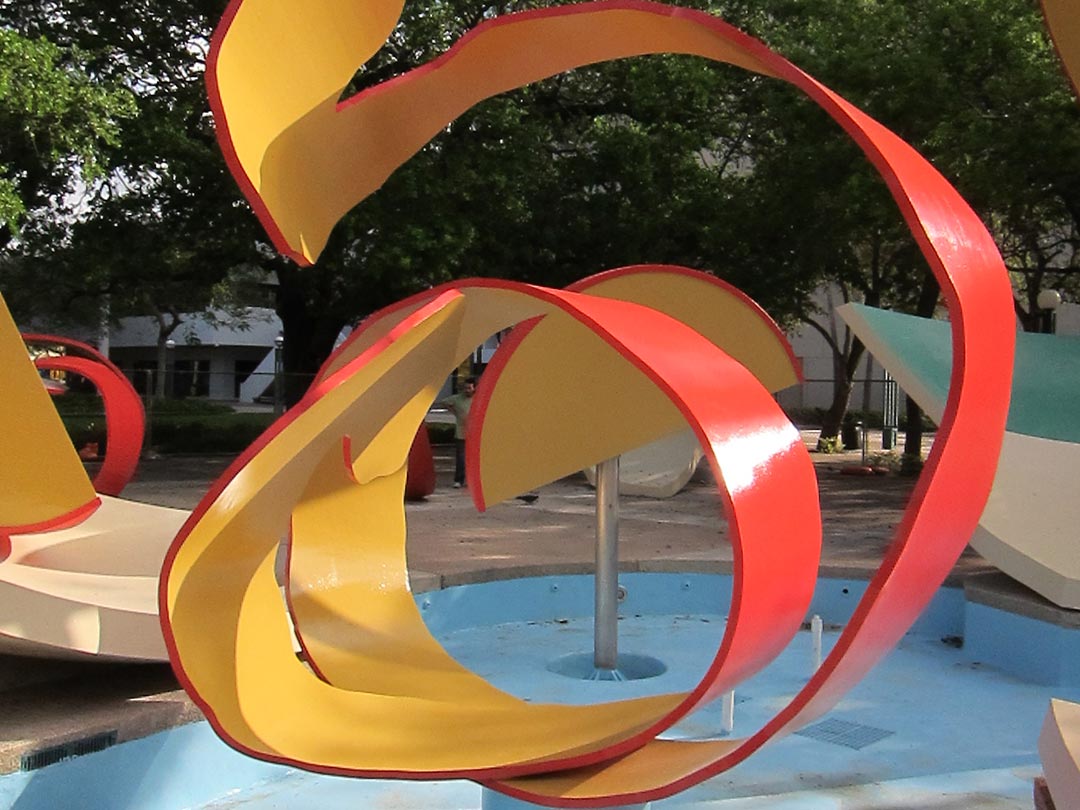 Buying art is just the first step. You have to make it last.

Rosa Lowinger is gratified that art conservation is finally being taken seriously in South Florida. Given the toll exacted by environmental forces and human interventions on artworks, it is increasingly important to ensure their longevity.

“To me, conservation is kind of a litmus test of professionalism, because usually curators like to spend money on buying new things, and doing flashy exhibits,” she said. “When they get to the level where they understand that the stewardship of those works is as important as their acquisition and display, then you’re playing in the big leagues.”

It used to be, she said, “Something breaks, something is damaged, we need to fix it. Or, something is going on exhibit; could we make it look prettier?” Now, she has helped implement collection-wide conservation systems with scheduled maintenance — “looking long-term and thinking holistically.”

RLA associate Kristen Watson Adsit described one aspect of that forward-looking approach: Before purchasing an important artwork — especially one that isn’t of recent vintage — commission a condition survey to establish a benchmark.

RLA’s biggest project is the Miami Marine Stadium restoration. “It’s our iconic building,” Lowinger said. “It’s a building that comes to be at a moment in Miami’s history in 1963, when our city is changing over from being a tourist town to an international capital.”

Designed by Cuban American architect Hilario Candela as a grandstand for speedboat racing, it was then the world’s longest cantilevered concrete span — and only three inches thick in many areas. It also served as a venue for religious services, filming and concerts. The Boston Pops, Jimmy Buffett, Ray Charles, the Beach Boys and the Estefans all performed there.

But after the stadium was abandoned in 1992, graffiti artists covered almost every inch of it with spray paint. Associate Kelly Ciociola added, “It’s attracted not only people tagging it for fun, but also brilliant street artists that come and put their mark on the building.”

Indeed, some of those artists are donating work in fund-raising for the stadium’s restoration.

In 2008, the Friends of Miami Marine Stadium began raising awareness of its significance. Adopted by the Dade Heritage Trust, it has joined the National Trust for Historic Preservation’s “endangered” list. Now, Lowinger said, “The Getty Foundation has rewarded [it] with a planning conservation grant to determine the methods that will be used to clean it, make repairs to the concrete and remove graffiti from the building.”

Technical and curatorial decisions abound. Normally, concrete repairs are painted, so surface matching isn’t crucial, “but when your material is exposed, the repairs to the building are going to have to be done in a way that they’re both structurally correct and visually and aesthetically correct,” Lowinger said.

Want a challenge? How about managing a collection of 750-plus artworks, about a quarter of which are exposed to South Florida’s sun, salty winds, rain and high humidity? That’s just part of the task of Miami-Dade County’s innovative Art in Public Places program, now in its 40th year. Curator Brandi Reddick and her team also commission artworks for new facilities.

Until 2007, the program was a standalone agency. Then, the county’s Department of Cultural Affairs, headed by Michael Spring, absorbed it, initiating valuable management protocols.

The program is funded from facility construction budgets. Jessica Berthin, trained as an architect, is a project manager and arts collection specialist. “Before 2007, our maintenance plans were almost shooting from the hip, in the sense that we would put out fires,” Berthin said. Now, armed with a content-managed website and an independent collection assessment, they’ve adopted a more-strategic conservation system.

During the proposal stage, artists must assure that the artworks will be “easy to live with.” The Art in Public Places staff includes two architects and a general contractor, allowing artists — more and more of whom are Miami-based — to receive practical advice about the suitability of materials and techniques. More money, too, because they can apply partial construction budgets (a floor or handrail) to supplement the art budget for that feature — a terrazzo inlay, for example.

“We get works that define a sense of place and make our county buildings better through an integration process,” Reddick said. County facilities (the airport, water-treatment plants and others) provide routine maintenance specified by the commissioned artists as part of their contract, advised by the program’s team. Emergency and major restorations are handled by the program.

It’s normal for steel sculptures to be periodically stripped and repainted, but investment in industrial coatings and proper maintenance reduces long-term costs by delaying this requirement for as long as 15 years.

Before repairs are done, a project manager schedules a consultation with the artist and a professional conservator to determine the best procedure. Lowinger noted that applying new paint over bad paint is a false economy. The artists can undertake the work themselves, or approve a pre-qualified vendor.

And technology evolves. Thirty years ago, artist Rockne Krebs underlined the Miami River Metrorail bridge with a rainbow of neon lights, but train vibrations caused frequent outages. Krebs died in 2011, but his estate has approved replacement of the neon with more-reliable LEDs to assure his “Magic City” lights continue to shine.

The Art in Public Places website, www.miamidadepublicart.org, provides a map-based virtual tour with opportunities to view artist information, including works in progress.

Other county and municipal agencies also commission public art and embrace conservation challenges. Kevin Arrow’s 200-square-foot kaleidoscopic glass mosaic Beatles Mandala commemorates the band’s visit to Miami Beach 50 years ago. His contract provides that he install it with an anti-graffiti coating, and he will specify annual pressure cleaning and re-application of the coating.

Nothing is forever, but this rigor helps assure that artists’ messages endure for generations.

George Schwartz’s conservation studio is in Boca Raton. His practice is wide-ranging, and he never knows what will come through the door.

One couple requested cleaning of two paintings in matching frames. They were children of Holocaust survivors, and the paintings came over with her parents from Europe after the war. They were “decorative pieces, unsigned and not of great note,” Schwartz said.

“The frames were out of proportion in their high quality compared to the artwork,” Schwartz said. “When I examined them by specular reflection of light [looking into the reflection of a light source], I realized that both had large oval features that underlay the top paint layer, and if you turned them vertically, you realized that they looked very much like two heads.”

It would be a gamble, but Schwartz suggested the possibility of exposing what were likely a pair of portraits. Microscopic analysis showed that the underpainting had been varnished. This implied the presumed portraits were complete — and valued.

“They decided to have me remove the top layer of paint — in fact destroying the two landscapes — but underneath we found two early 18th century paintings of some Polish royalty, done by someone very well recognized in Poland,” Schwartz said. The gamble paid off.

South Florida’s climate poses a serious threat to works of art — even indoors. “Living by the ocean, the high humidity can be a real problem, but with careful treatment and careful handling and careful encapsulation or framing, a work can survive quite well, even in a highly variable climate,” Schwartz said.

Light is a killer, but sometimes fading might be noticed only when one of a series of pieces is taken from storage and hung next to one of its “siblings.” The “ounce of prevention” adage holds true: Conservators recommend rotation — especially of sensitive paper and fabric works — into storage or into darker parts of the home.

Conservation and appraisal are distinct professions. Why? “There’s a tremendous opportunity for a conflict of interest in trying to value something. You could say this thing is worth $100,000, and I’m only going to charge you $7,000 or $8,000 to repair. But what if the piece is only worth $300? It’s just too much of an opportunity for a conflict of interest, so no conservator should appraise and no appraiser should conserve.”

Schwartz’s big regret: “Many pieces that are very worthwhile as works of art don’t get conserved because the owners don’t feel that it’s a good monetary investment.”

Schwartz is critical of art-school instructors who encourage an attitude of “anything goes” with regard to using non-archival materials. “Those things are nightmares from the point of view of the conservator. They can almost be thought of as performance art, because those works do not have the longevity, and they’re highly priced and highly coveted, and they keep being maintained as best as possible as the state of the art permits, but ultimately they’re not going to be around for three, four or five hundred years.”

Stephanie Hornbeck is also a generalist, but her sub-specialty is in ethnographic art. She’s currently preparing works for a Lowe Museum survey of works from Central and West Africa. These include polychrome wood, beads, textiles, ceramics and iron sculpture. Twelve Florida museums call on her regularly.

Complying with the American Institute for Conservators’ code of ethics, she doesn’t engage in appraisal or authentication, but she might be brought in as a consultant. “Our work is evidence-based, and so we can then present the findings, but to draw conclusions from them — that, we leave ideally to scholars: to art historians, to archeologists, to curators,” she said. “That’s not really the realm of the conservator.”

The conservator deals primarily with the stabilization of the structure and the surface of objects. But once that is achieved, aesthetic considerations arise. A museum will usually want to preserve the original materials as much as possible and intervene minimally.

Another principle, “reversibility,” allows future conservators to identify and even remove interventions to examine or return to the original object. This mitigates against using tough, permanent materials or even matching an original paint, because then how could one identify the restoration?

A pair of Louise Nevelson wooden sculptures at the Pérez Art Museum Miami (PAMM) presented a challenge. The original black spray paint had severe cracking, lifting and some flaking. Another client might have requested sanding and repainting, in which case Hornbeck would have withdrawn.

Fortunately, chief curator Tobias Ostrander shares her conservative ethos and would accept some visible surface irregularities. Hornbeck managed to restick much of the lifted paint, consolidating the surface. Then, using watercolor, she painted the exposed wood where necessary, lavishing a total of almost 200 hours on the project.

Rustin Levenson and her team, located in the Bird Road arts district, treat paintings for private collectors and museums all over the state.

Their work includes treating paintings, such as two just returned to the Salvador Dali Museum in St. Petersburg. Their focus on collections care includes preparing paintings for travel, such as Faith Ringgold’s, Die, Die, Die, which left PAMM this winter, or condition-checking the incoming paintings for the Beatriz Milhazes exhibit, now on view there. (Read Anne Tschida’s review at bit.ly/HeraldBeatrizMilhazes)

Viviana Dominguez is addressing graffiti in a different arena. Last year she began contacting the Wynwood mural artists and offered to help them protect their work from destructive tagging (rogue signature graphics by other artists, or “taggers”).

“I contacted the artists and offered to teach them how to safely remove the graffiti and how to protect the murals with anti-graffiti coating. ,” Dominguez wrote in an email. “I used these techniques in Los Angeles during the 15 years I worked there with the art community.” Response has been strong: “Soon I will be working with them on removing the tags.”

Next year, the national association of conservators (the American Institute for Conservation of Historic and Artistic Works) will convene in Miami. Local members will present wide-ranging papers and organize activities for their colleagues. Dominguez will showcase the Wynwood murals and demonstrate the preservation methods she intends to implement.

“As a conservator, I feel I have the responsibility of informing and serving the community,” she said.