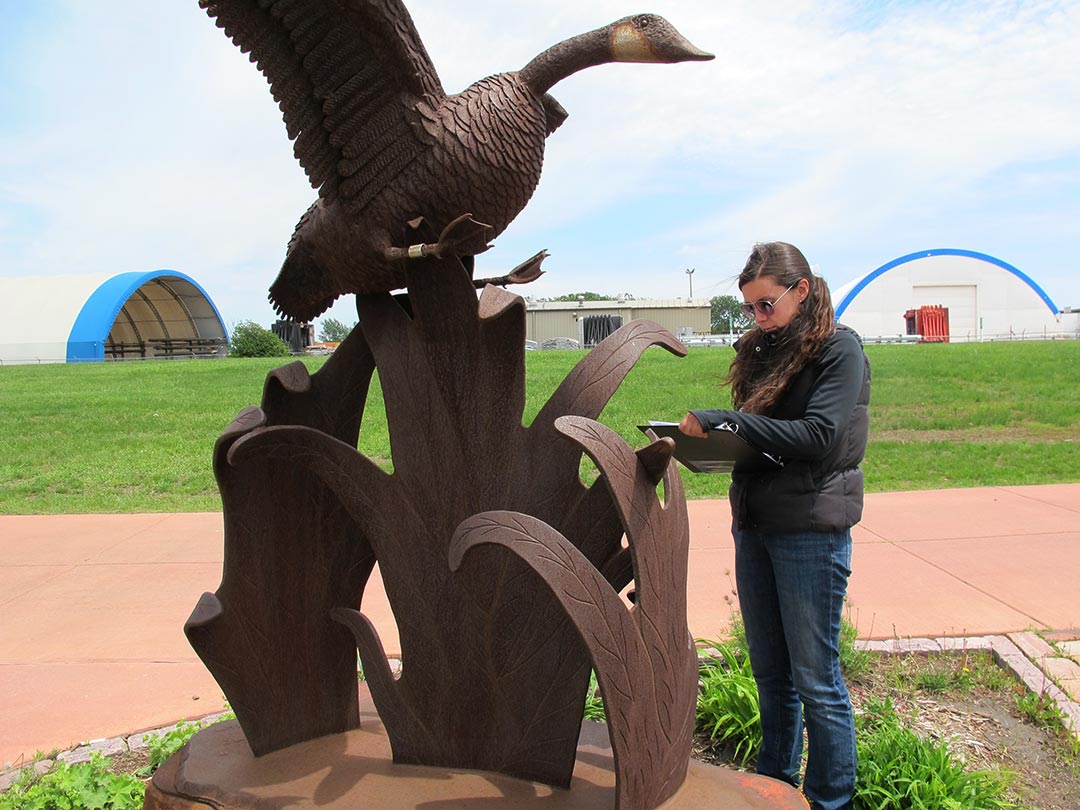 A steel sculpture of a woman is gone from Lyon Park.

Her hopeful silhouette – leaning forward, one arm raised to the sky – was removed in favor of government prudence.

City officials hired a company to examine the piece and determine upkeep expenses. It’s a practice City Hall plans to move forward with each time it adds to its portfolio, Planning Director Mike Cooper said.

“Now that our inventory of public art has expanded significantly over the years, the investment is pretty substantial,” Cooper said.

The sculpture at Lyon Park, “Effortlessly Buoyant” by Indiana-based artist Gregory Mendez, was removed this week after it spent more than year looking out over the intersection of 14th Street and Phillips Avenue.

Crafted out of steel, it first arrived in Sioux Falls for the 2014 SculptureWalk. It was eventually placed atop the Lyon Park sign near the park’s downtown entrance.

Before adding to the city’s collection, officials must now obtain a waiver from the artist and a review of the artwork’s condition. The same rules apply to future acquisitions, including SculptureWalk’s People’s Choice winner. City Hall has a long tradition of buying the winner, no questions asked.

Mendez’ sculpture of a woman reaching toward the heavens didn’t pass the new test, even though nearby residents agreed to buy it and donate it to the city.

Katrina Lehr-McKinney, president of the All Saints Neighborhood Association, submitted the paperwork, hoping to keep the sculpture at Lyon. She understands the city’s hesitation, but wonders about the future.

“I hope the city is thinking about investing in public art,” Lehr-McKinney said. “And making sure that they have budget set aside to maintain public art.”

Steel in the sculpture suffered “extensive corrosion,” according to findings from the Los Angeles-based company hired to analyze the piece. The group, RLA Conservation of Art and Architecture, recommended against accepting the artwork.

The city’s art budget is a crumb of the overall pie. And officials don’t just acquire pieces without committing to upkeep, said Zach DeBoer, a member of the city’s Visual Arts Commission.

“It all just goes to standards of living and creating a good environment,” DeBoer said. “Even down to something like the mosaic wall and city-owned pieces. They’re all part of our culture.”

City officials first hired RLA in 2013 to help maintain its existing pieces of art, including the deteriorating youth mosaic wall along the river downtown. City leaders have since committed thousands of dollars to fix the wall, a collaborative effort from hundreds of Sioux Falls children.

“We have all these pieces of public art and we never had a real plan of how they were going to be maintained,” Cooper said.

Jim Clark sees value in the city’s approach. He takes the same precautions with SculptureWalk as the event’s director.

But when it comes to “Effortlessly Buoyant,” Clark was disappointed. The sculpture was a good fit for the park, and cleaning up is as simple as bringing it to a foundry, he said.

“It’s a great piece of art and a lot of people like the rust color,” Clark said. “I’ve had people tell me that.”