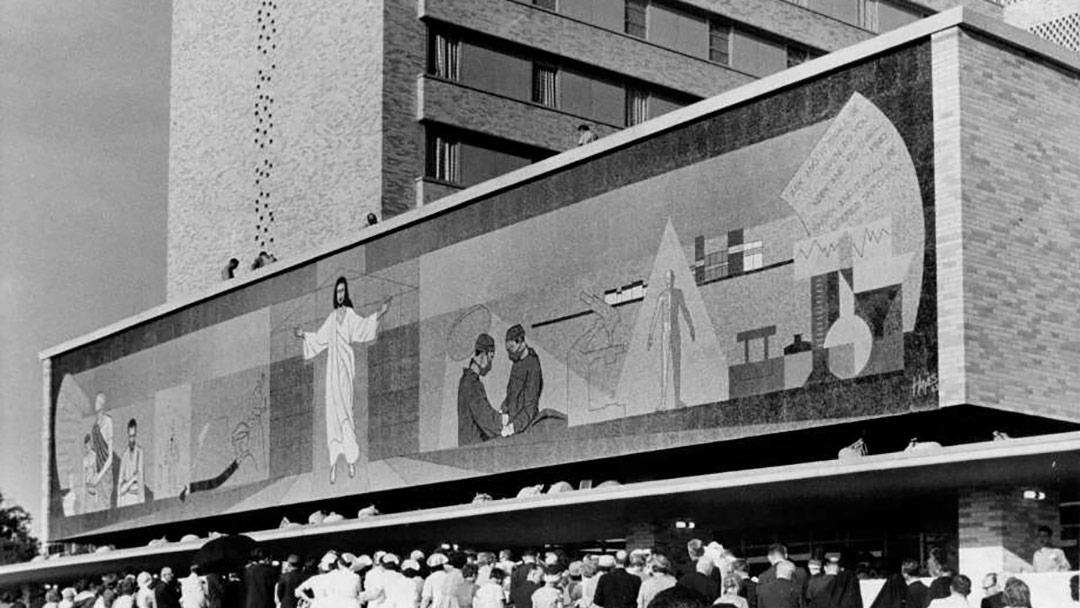 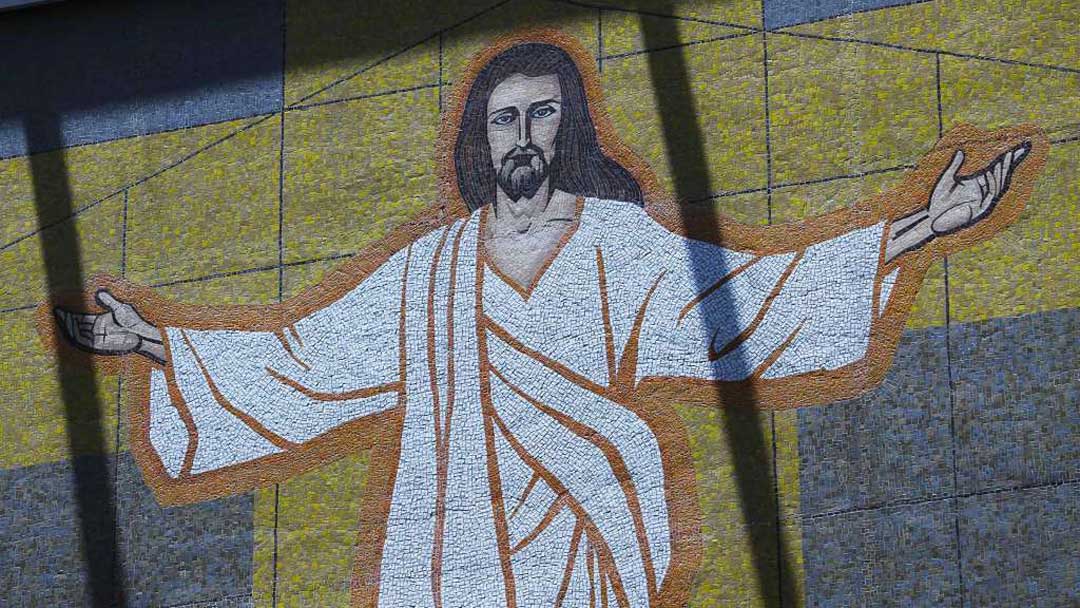 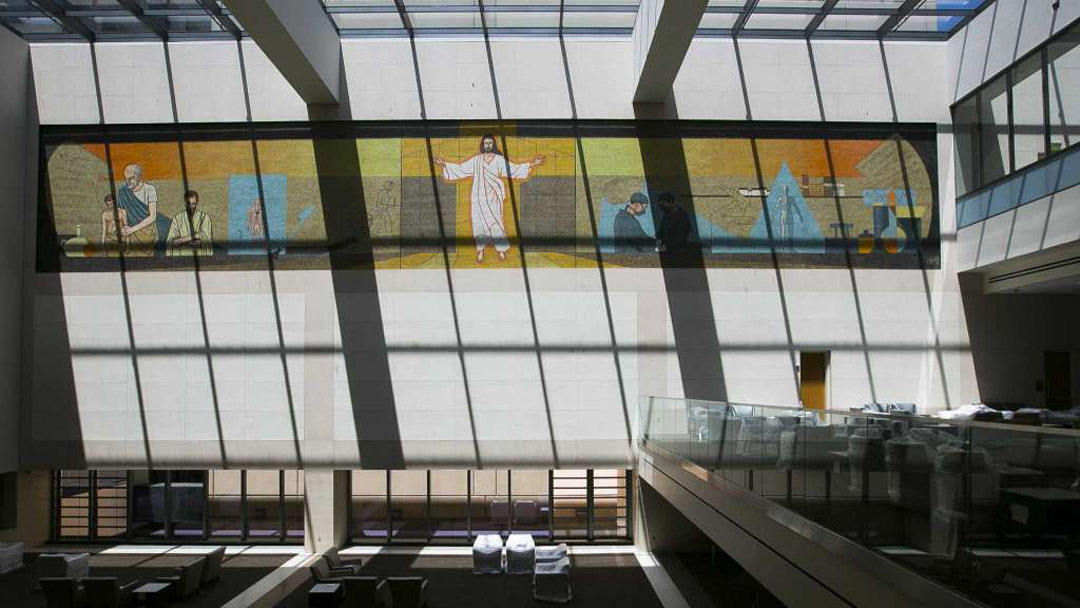 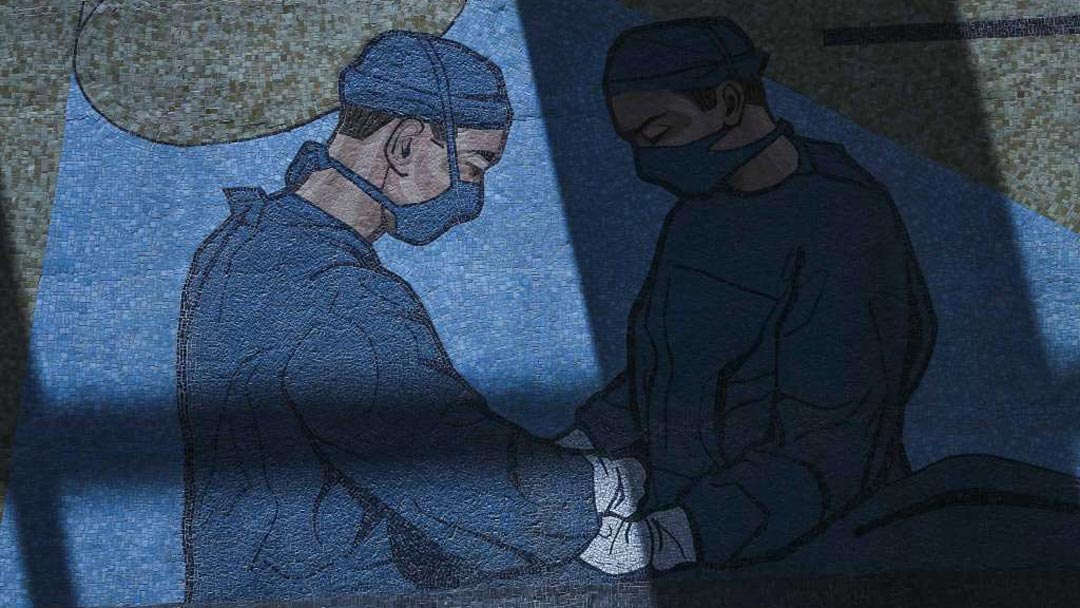 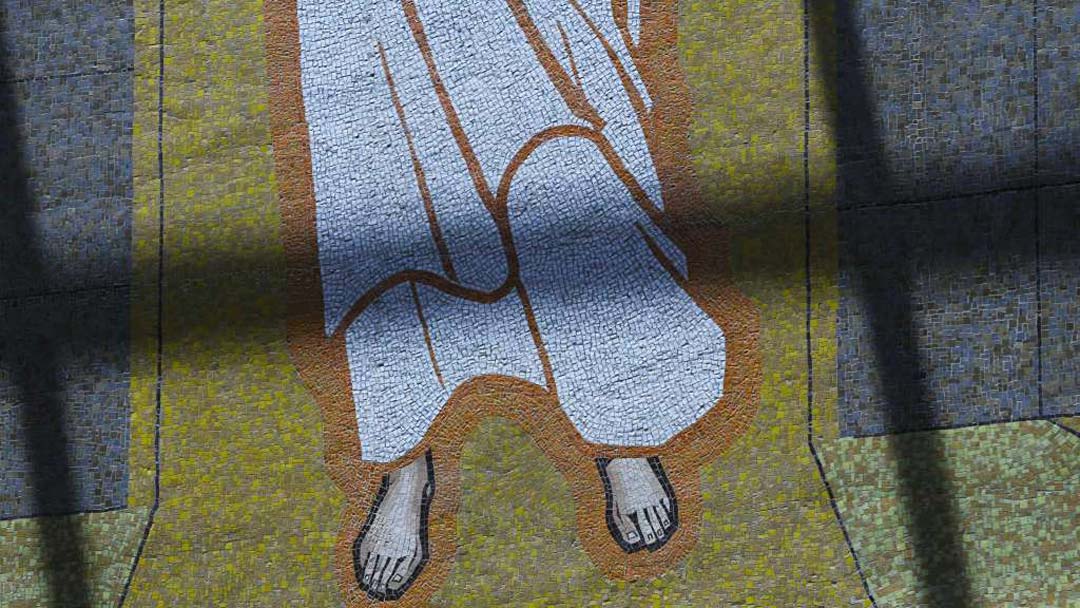 Inside the new Barbara and President George H.W. Bush Atrium on the Houston Methodist campus stands a 16-feet-tall mosaic, stretching more the 98 feet wide, with 1.5 million tiny glass tiles shimmering in the light streaming in from the skylights.

At the center appears Christ, with his arms outstretched, almost welcoming the viewer, and serving as the basis for the piece’s name, “Extending Arms of Christ.”

“It’s not just a picture, but it’s truly a symbol of what we’re doing as a faith-based hospital,” said Rev. Charles R. Millikan, vice president for spiritual care and values integration for the Methodist hospital system.

The artwork, however, was only recently rescued from obscurity and restored to a place of prominence on the Houston Methodist campus.

While the atrium may seem to have been built with the mosaic centerpiece in mind, as the walls perfectly sized for the artwork, that is far from the case, said Sidney Sanders, senior vice president of design, construction and real estate for Houston Methodist.

“It took a whole series of unrelated events for this to happen,” he said. “This is one of those happy accidents.”

The mosaic was originally installed at the hospital’s entrance facing Fannin Street, a little more than a decade after Houston Methodist moved to the Texas Medical Center. Artist Bruce Hayes designed the piece, constructed it in Florence, Italy and adorned the hospital with it in 1963.

In the 1980s, a porte cochère was installed at the hospital, which partially hid the artwork from view.

“It pretty much obscured the mosaic to all but those who knew to look for it,” Sanders said. “It was out of sight, out of mind.”

As the years passed, the mosaic was neglected and almost forgotten, a victim to the elements and pollution from nearby traffic.

Then, Houston Methodist began planning to replace the 1950s building — and the opportunity to resurrect the mosaic became evident.

In 2014, designs for the first phase of a new hospital were in the design phase, when, Sanders said, Judge Ewing Werlein Jr. stepped up to make sure that moving the mosaic be part of the effort.

“Judge Werlein really was the catalyst for doing this sooner rather than later,” Sanders said.

Werlein served as chairman of the board for Houston Methodist and had always been fond of the artwork.

“It became something of a great iconic image on Fannin,” he said. “Then, the mosaic became largely hidden. You could maybe see if from higher up or from across the street, but I looked forward to a time when the hospital would be able to move it.”

Around the same time, Houston Methodist acquired Favrot Hall, a former graduate and postgraduate facility in the Texas Medical Center.

“The real estate was really important to us,” Sanders said.

Crews began demolishing the building in 2013 and the following year, started erecting the Paula and Joseph C. “Rusty” Walter III Tower, a 22-story, $700 million facility, which will house 366 new beds, as well as state-of-the art operating rooms and surgical suites.

The Barbara and President George H.W. Bush Atrium is the hub connecting the new Walter Tower to the rest of the campus. The three-story atrium will house a grab-and-go bistro and gift shop.

While designing the space, a solid, plain wall became a focus, one that was just the size of the mosaic.

Originally, plans called for moving the mosaic to another exterior location. Switching its placement to indoors, however, had a number of advantages, Werlein said.

“We had the great advantage of locating the mosaic inside, where it will be protected from the elements and from obscurity,” he said.

In 2014, Houston Methodist retained the services of Rosa Lowinger and Associates, a national, woman-owned firm that specializes in conserving art and architecture.

Original records for the mosaic were lost in the Tropical Storm Allison flood, so the firm had to start from scratch.

Kelly Ciociola, senior conservator in the company’s Miami office, worked on the project from the beginning. She said that simply removing the artwork posed a number of challenges.

Her staff had to work above the porte cochère and next door to the emergency entrance. Special scaffolding was installed to help crews work around the action.

Because of physical constraints, the mosaic had to be cut into 93 pieces. “We wanted to make sure we would be able to put it back together again,” Ciociola said.

A number of tests were performed to ensure the process would work. The company also retained help from Walter P. Moore, Bennett Preservation Engineering and Hunt Construction Group, as well as a local firm TyArt.

The mosaic came down in January and February of 2017 and was stored at TyArt for the next few months.

While there, Ciociola and her crew worked on the pieces, preparing them for hanging again. Then, they added new scaffolding inside the atrium, as the building was still under construction, and began erecting the mosaic last summer.

The hard part followed — cleaning and restoring the art. The process started last August and wrapped up in March.

Tiles had gone missing over the years, and finding new ones to match the colors of the original mosaic was difficult, Ciociola said.

“There are many different colors and multiple shades of each color,” she said. “We really had a challenge in front of us. We sourced tiles from 10 to 12 different companies. Some of the best ones are from Italy. It was quite the ordeal.”

The original tiles also aged over the past 60 years. Rosa Lowinger and Associates developed techniques to weather the new tiles, to help them match the original pieces.

The firm then had to regrout the structure. Their ultimate goal was to make the 93 sections look seamless.

“They did a fabulous job,” Sanders said.

The building will open in early June for employees, and by August the first patients will be admitted.

They will be able to step back and take in the artwork, as Ciociola has already. “It’s such an amazing experience to stand in the atrium and look up at it,” she said. “It will be seen now in a way it wasn’t before. It’s where it will be appreciated by all groups at the hospital.”

Werlein is equally enthusiastic about seeing the mosaic in its new home. “It always felt like such a loss,” he said. “To recover this great mosaic is just, to me, as exciting as anything in the hospital.”

Werlein said that the statement that the piece makes is integral to the hospital.

“There in the very center is our lord and savior Jesus Christ with his outstretched arms, reminding us that all healing, like life itself, comes from God,” he said. “That’s a message I believe that people in need of healing will find very reassuring and very comforting.”

For Rev. Millikan, who was born in Houston Methodist and continues to grow its spiritual programs, the symbolism is equally important.

“The extended arms of Christ welcome both science and religion,” he said. “There’s no conflict here. You have Christ in the center embracing it all.”

Lindsay Peyton is a writer in Houston.